Bikram was back this week and with his return came three very late nights. On Monday, he kept us up till 3:45 am watching four or five episodes of Mahabharat, an Indian TV series produced in the 1980s. I wasn't able to keep my eyes open for a full episode, as I drifted in and out of consciousness. Every time I'd wake up though, the same scene would be on the screen: 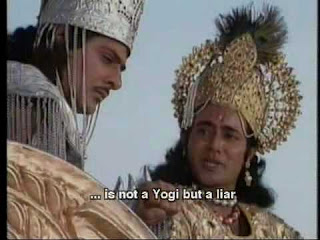 Krishna, the guy on the right, would be talking incessantly. Apparently this went on for an entire episode and the next day I couldn't get his voice out of my head. The other episodes contained very low-quality battle scenes. The production reminds me a lot of the Hitchhikers Guide to the Galaxy TV series with its hilariously cheesy special effects.

On Tuesday night, there was an optional movie, which I opted to skip. It was great to go to bed right after posture clinic. Wednesday and Thursday we stayed up till 3am watching Koi... Mil Gaya and its sequel Krrish. They are science fiction films starring Hrithik Roshan as the superhero... and superhero is he ever! It sure is a pleasure to wake up and see this image on the screen: 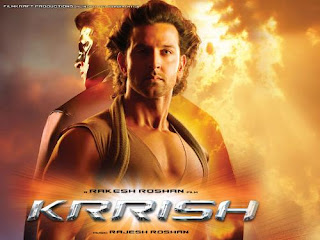 I managed to watch up to the intermission of the first film but didn't see anything beyond the opening credits of the second. I was out cold, as were many of my fellow trainees. It's very challenging to do two classes a day, sit through lectures and posture clinics, and then read subtitles till the wee hours of the morning. Luckily I'm able to sleep just about anywhere these days and in all kinds of awkward positions.

In posture clinics this week, I got through Standing Separate Leg Head to Knee, Tree, and Toe Stand. Feedback on my delivery continued to be positive and I felt I was able to let go of my perfectionism. Having little sleep helps you to get out of your head to a certain degree. I was given more bodies to work with for Tree and Toe Stand, which I enjoyed. Even though I was struggling to find the words in Toe Stand at one point, I felt like I was teaching a real class. I saw everyone and was able to recognize that people's ability to do the postures varies. Some people can do them flawlessly, while others only go into the first or second parts. Bikram Yoga is a beginner's yoga, so I need to get use to the idea that my students' practice will be all over the map.
Next week we move to the floor series, which is where the real yoga begins! It actually says this in the dialogue after the standing series: "That was the warming up exercise, now the class begins." In many ways, where we are with the dialogue mirrors where I am with my own practice. Up to this point, I've been warming up -- having to sit out postures or even entire series of postures. This week I saw a transformation in my body. I was able to do both the morning and evening classes fully and with a lot of strength. I have no soreness and my body feels limber and strong. I'm still stiff in the morning, but in the afternoon I open up like a flower petal blooming. My back bends are deeper and I can now easily touch my head to my feet in Stretching Pose. I hope things continue in this direction through the end of training.

My mood transformed quite a bit too this week. I felt much more reclusive than previous weeks, wanting to spend my free time alone. I've also been thinking a lot about changes I need to make when I get home and am unsure of which direction things will go. I'm hoping for a certain level of clarity by the time I board the plane back to Toronto. I know what I'm going through is important and while my thoughts are often difficult to digest, I'm trusting that they are part of the transformational experience that teacher training often yields.

I reviewed my notes from the first day of training and I had wrote that weeks 3, 4, and 5 are "breakdown weeks." I've personally not had a breakdown and continue to see this training as one of the best things I could have done at this stage in my life. Not sure what the next four weeks will hold, but I know I'm exactly where I'm suppose to be.
Posted by Chrissy D. at 3:59 PM